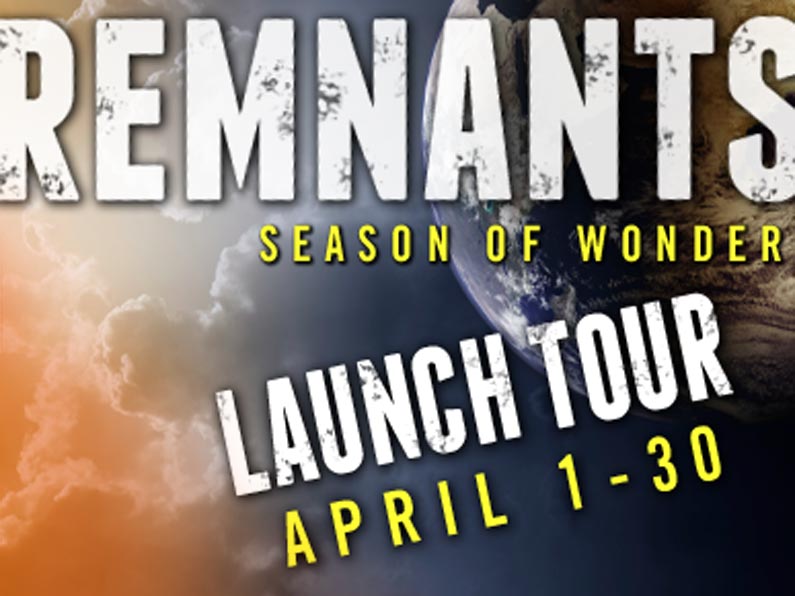 These awesome bloggers have all agreed to host me on their sites during our launch month of April. In return, I’m giving them exclusive insider-content, so you can read a ton about me and my book and hopefully get SO excited, you buy a copy of REMNANTS, plus 10 more for friends. The dates and special information can be found below. But WAIT. There’s MORE. If you go to each stop in the blog tour, comment and collect the clue in each post, and enter this Rafflecopter form by May 9, 2014, you will be in the running for a Kindle Fire HDX or iPod Touch (USD $229)!

April 1: What Inspired Me to Write Remnants? — Books with Bite
April 2: Ten Things You Might Not Know About Me — Page by Paige
April 3: Character Spotlight: Andriana — Edgy Inspirational
April 4: My Favorite Dystopians — Tina’s Book Reviews
April 5: Romantic Scene Snippet from Remnants — Kathryn Cooper Writes
April 6: Character Spotlight: Ronan — Relz Reviewz
April 7: The Reasons Why CO is the Best Place to be a Writer — A Book & a Latte/LiteraryCO.com
April 8: Book Birthday! Lisa’s Favorite Birthday Memory — Just Another Book Lovin’ Girl
April 9: Lisa Loves Libraries. Find out why. — Karin’s Book Nook
April 11: 20 Quick Q&A’s with LTB — Notes for the Sitcom
April 12: Inspiration Behind the Locale: Keallach’s Winter Palace — Paranormal Indulgence
April 13: Audio Adrenaline: LTB’s Faves of Late — Reading Teen
April 14: The Character of Names — The Mod Podge Bookshelf
April 15: Inspiration Behind the Locale: Zanzibar — Page Turner’s Blog
April 16: Why YA for LTB? — JoJo’s Corner
April 17: Why Genre-Bend of Remnants? — Candace’s Book Blog
April 18: The Darcy-ist Character in Remnants — Austentitis
April 20: The Importance of Funny: Comic Relief — The Overweight Bookshelf
April 21: Dramatic Scene Snippet from Remnants — Mundie Moms
April 22: 10 Things LTB Would Miss in Dystopian Future — We Are Word Nerds
April 23: 10 Things LTB Would Be Glad to Be Without — Christian Bookshelf Reviews
April 24: The Spiritual Aspect of Remnants — My Favorite Pastime
April 25: 10 Tweets the Remnants Might Send — YAkety YAks
April 26: 10 Places I Want to See Before We Live in a Dystopian World — Addicted Readers
April 28: 7 Reasons Being an Empath Would Stink — The Best Books Ever
April 30: Book 2 Teaser: Unedited Scene from Book 2, Season of Fire — Once Upon a Twilight!
Collect the clue in each blog post as you go, comment on each blog, and then return here on April 30 to enter the Rafflecopter with the clue stream in hand! You have until May 9, 2014 to enter.