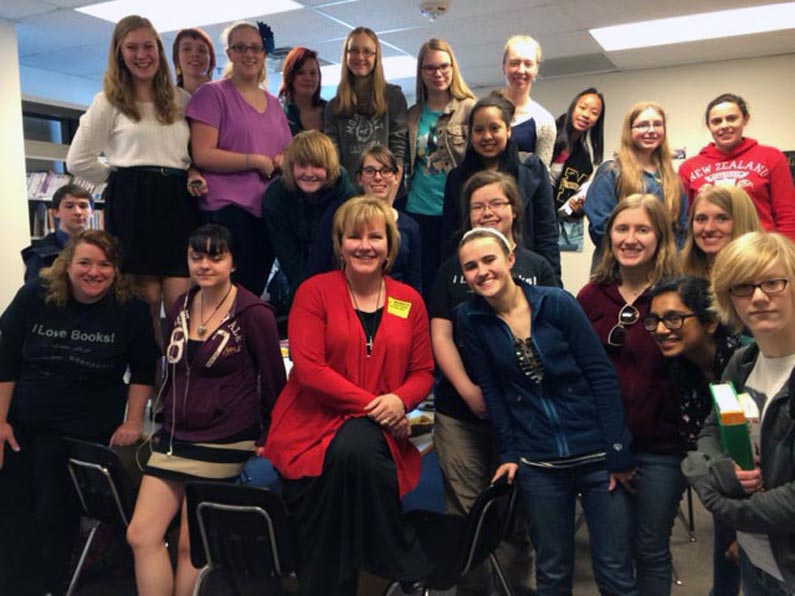 Recently I went to go and visit with the Monarch High School book group in Louisville, CO. I don’t usually do school visits because of lack of time, but I was (1) invited by a serious River of Time fan (thanks, Kenna!); (2) she was backed up by her librarian; (3) they’re just up the road from me; and (4) their book group is huge–over eighty students!!–giving them room to claim “the largest in the world.” 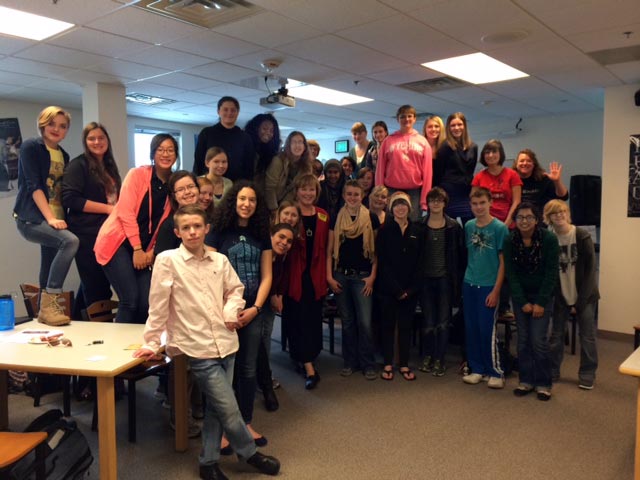 I loved my time with their group, which is split into two lunch periods meeting every Friday, and really enjoyed getting to know their librarian-sponsor, Beatrice Gerrish, who was also the 2012-2013 Colorado Librarian of the Year. This trend-setting leader is obviously well loved by her students and doing such radical things as *gasp* casting out the Dewey Decimal system in favor of a more organic, bookstore-like setup of her library. I managed to snag this busy lady to ask her some questions on the eve of one of two lock-ins she does with her students every year. (You read that right. She volunteers to stay up all night and corral her kids in the library. TWICE A YEAR. That’s how much she rocks.) 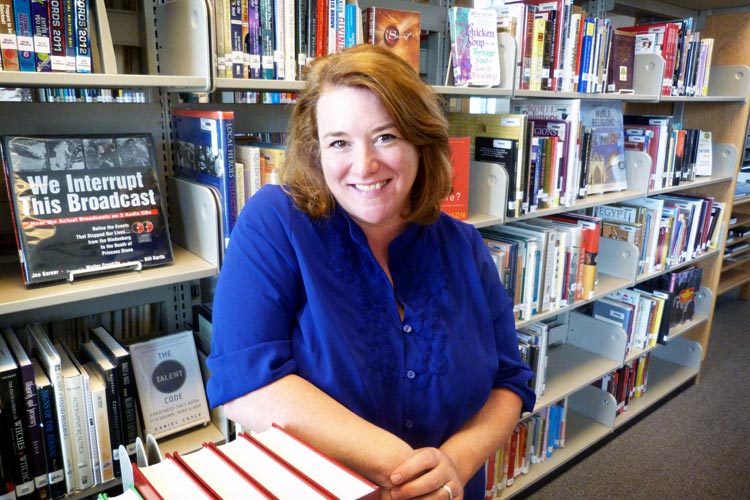 Q: What would you suggest to other high school librarians, who want to start a book group?

A: Start with the kids already hanging out in your library–those frequent readers who are hanging around wanting to talk about books. My first year the club had six kids. The first meeting I made the classic assumption that the kids wanted to read the same book, but after we read Percy Jackson they said they have so much homework and things they have to read that they just want to read what they wanted to read. Once I got that–it’s really THEIR club, not mine–the number of kids coming has grown steadily each year. Every year, it looks different; I let it roll out in whichever direction the kids want to take it. Mostly I see myself as a group facilitator/ book supplier. This year, we have a weekly attendance of fifty-sixty kids.  There are eighty when everyone shows up.

Q: How do you choose your student leadership? How important are they?

A: Leadership is important when it’s a student lead club. In the past, I chose the most enthusiastic students and just appointed them. Now we have four presidents–two at each lunch–and they appoint their own successor.  They know what it takes to be a leader, so they seem to make good choices. We are looking for kids that speak up regularly, attend our events and the fundraiser, like to read, and a positive attitude.

Q: What’s the format for each week’s book group lunch?

A: Unless we are having an author visit-–like yours :-)–the kids prefer not to read the same book, but instead to share out (do mini book talks) about books they are reading; they talk about books they like…and hate. The kids have gotten pretty good at doing them. I usually kick off each meeting with ten minutes or so of announcements and some giving some quick book talks, then I turn it over to them. Some days they don’t talk much; other days they won’t stop talking. I also have the kids post brief two-three sentence reviews of books they like on our club’s Facebook page.

Q: Have you ever had a year where the membership dipped? If so, how did you renew interest?

A: We’ve had this club for seven years now, and so far the numbers have gone up each year. Of course, the numbers fluctuate each week somewhat, but finding the optimal time for everyone to meet–in my school it is during both the lunches on Fridays AND meeting each week–seems to be really important. It makes it a regular destination for them.  Also, I always have snacks–they bring their lunches, and I bring a snack.

(When I was there, the “snack” was cookies. I think cookies always are a winning choice with kids!) Thanks, Beatrice, for sharing your experience with my readers and other librarians thinking about starting a high school book group!