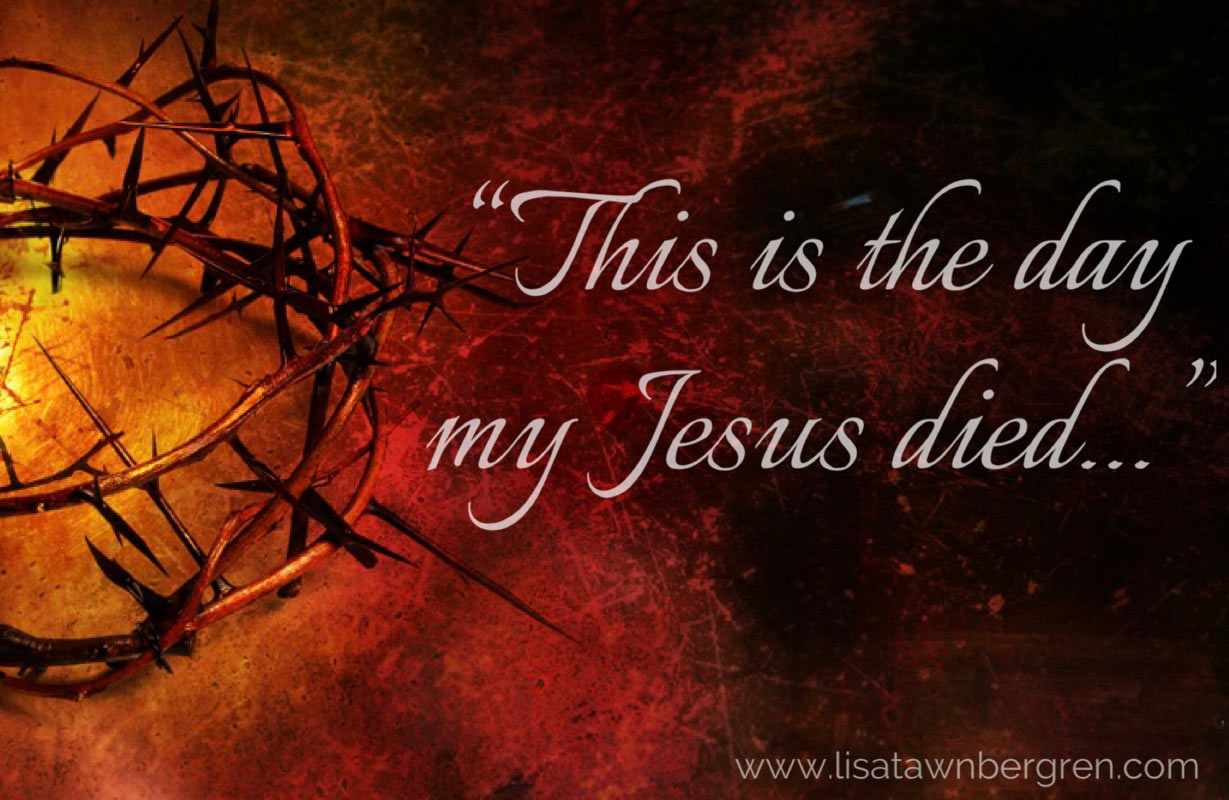 One year on Good Friday, my great-grandmother stood on her North Dakota farm, with tears streaming down her face. When my grandmother asked her why she was sad, she said, “This is the day my Jesus died.”

I always think of her tender heart on Good Friday, and how I want to feel my Savior’s sacrifice as clearly as she did. We can’t absorb the full celebration, light and LIFE of Easter morning without first recognizing the darkness, grief and DEATH that Christ conquered first.

A blessed Good Friday to all believers and seekers. Hang in there. Sunday’s coming. —Lisa T. Bergren

21 There was a man walking by, coming from work, Simon from Cyrene, the father of Alexander and Rufus. They made him carry Jesus’ cross.

22-24 The soldiers brought Jesus to Golgotha, meaning “Skull Hill.” They offered him a mild painkiller (wine mixed with myrrh), but he wouldn’t take it. And they nailed him to the cross. They divided up his clothes and threw dice to see who would get them.

25-30 They nailed him up at nine o’clock in the morning. The charge against him—the king of the jews—was printed on a poster. Along with him, they crucified two criminals, one to his right, the other to his left. People passing along the road jeered, shaking their heads in mock lament: “You bragged that you could tear down the Temple and then rebuild it in three days—so show us your stuff! Save yourself! If you’re really God’s Son, come down from that cross!”

31-32 The high priests, along with the religion scholars, were right there mixing it up with the rest of them, having a great time poking fun at him: “He saved others—but he can’t save himself! Messiah, is he? King of Israel? Then let him climb down from that cross. We’ll all become believers then!” Even the men crucified alongside him joined in the mockery.

33-34 At noon the sky became extremely dark. The darkness lasted three hours. At three o’clock, Jesus groaned out of the depths, crying loudly, “Eloi, Eloi, lama sabachthani?” which means, “My God, my God, why have you abandoned me?”

35-36 Some of the bystanders who heard him said, “Listen, he’s calling for Elijah.” Someone ran off, soaked a sponge in sour wine, put it on a stick, and gave it to him to drink, saying, “Let’s see if Elijah comes to take him down.”

37-39 But Jesus, with a loud cry, gave his last breath. At that moment the Temple curtain ripped right down the middle. When the Roman captain standing guard in front of him saw that he had quit breathing, he said, “This has to be the Son of God!”

40-41 There were women watching from a distance, among them Mary Magdalene, Mary the mother of the younger James and Joses, and Salome. When Jesus was in Galilee, these women followed and served him, and had come up with him to Jerusalem.